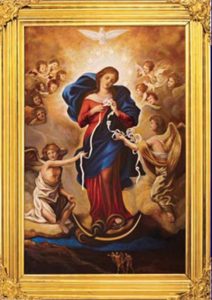 The fourth annual novena to Mary, Untier of Knots, will take place from Monday 25 September to Tuesday 3 October 2017 inclusive, in the Cathedral of SS. Patrick & Felim, Cavan, with a Novena Mass each evening at 7:30p.m. except Sunday 1 October when there will be Novena Devotions, also at 7:30p.m.

The theme of this year’s Novena is “We are Family”, in preparation for the forthcoming World Meeting of Families in Dublin next year.  The Novena is being organised by the Kilmore Diocesan Pastoral Centre with the assistance of the priests and staff of the Cathedral Parish of Urney and Annagelliff in Cavan.

In an address given in October 2013, Pope Francis said: ‘“What are the knots in my life?  Father, my knots cannot be undone!” It is a mistake to say anything of the sort! All the knots of our heart, every knot of our conscience, can be undone. Do I ask Mary to help me trust in God’s mercy, to undo those knots, to change?  She, as a woman of faith, will surely tell you: “Get up, go to the Lord: he understands you”.   And she leads us by the hand as a Mother, our Mother, to the embrace of our Father, the Father of mercies’.

The first night of the Novena, Monday 25 September 2017, will celebrate the countdown to the 2018 World Meeting of Families in the Cathedral of SS. Patrick & Felim, Cavan, at 7:30p.m. This will be a diocesan celebration with all 34 parishes in Kilmore been invited to send representatives to the ceremony at which Bishop Leo O’Reilly will preside.  Everyone is welcome to attend this special event. The guest speaker will be Fr. Timothy Bartlett, Secretary-General of the World Meeting of Families.  The new icon of the Holy Family, commissioned for next year’s event, will be present in the Cathedral in Cavan from Monday 25 to Friday 29 September when it leaves after the 10:00a.m. Mass that morning. The combined choirs from the Crosserlough parish will lead the music at this ceremony with Conor Kiernan as organist and choir director.

A specially commissioned World Meeting of Families 2018 icon of the Holy Family, which was unveiled and anointed on the 21st August 2017 in Knock during the launch of the one-year programme of preparation, will be present in the Cathedral from Monday 25 to Friday 29 September.  The icon, written by Mihai Cucu with the assistance of the Redemptoristine Contemplative Community in Drumcondra as part of their ongoing prayer for families, is meant to encourage both reflection and prayer as part of the journey of preparations to World Meeting of Families 2018.  It will remain in the Cathedral until after the 10:00a.m. Mass on Friday morning when it will move to Belfast. 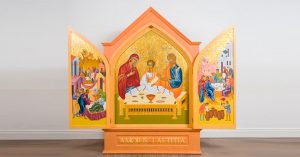 The diocesan petition box, which was presented to the diocese at last month’s event in Knock, will be brought to the Chapel of the Holy Family where it will remain for the duration of the Novena. The petition box will then go around the 34 parishes in the diocese over the coming months.  Contemplative communities around Ireland have agreed to take petitions collected from families and to pray for them during the coming year. 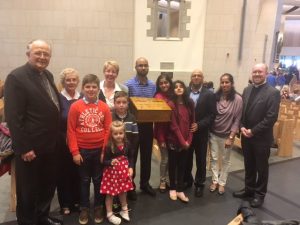 The other confirmed speakers for this year’s Novena include: Tracy Harkin of the Iona Institute Northern Ireland and Every Life Counts who will speak on “Communicating Truth with Love” on Tuesday 26th;  Rose McGowan, National Vice-President of the Society of St. Vincent de Paul on Wednesday 27th; Aogán O’Fearghail, President of the GAA on Thursday 28th; Fr. Donal Neary SJ, Editor of The Sacred Heart Messenger, who will speak on “We are Family – The Church” on Friday 29th; Fr. Patrick Cahill, co-founder of the Holy Family Youth Ministry on Saturday 30th; Davide Barbieri from the Cenacolo Community in Knock who will speak on the impact of addiction on the family on Sunday 1 October; Catherine Wylie, founder of the Catholic Grandparents Association on Monday 2 October; and Senator Ronán Mullen on Tuesday 3 October.

There will be individual confessions available after Mass on Tuesday 26th.  The Happy Notes Choir from Cavan General Hospital will provide the sacred music for the Mass on Thursday 28th during which there will be the liturgy of the Anointing of the Sick.  There will be a blessing of babies and young children after Mass on Wednesday 27th, a blessing for grandparents on Monday 2 October and one on Tuesday 3 October for couples celebrating significant anniversaries .

There will be a special emphasis on youth on the Saturday of the Novena.  Young people from across the diocese will gather in the Diocesan Pastoral Centre at 1:30p.m. for a special youth event, entitled “Food for Soul and Body”, facilitated by the Scala Redemptorist Youth Ministry Team from Esker in Co. Galway.  At the end of the event, the participants will process to the Cathedral to join the local parish community for the 7:30p.m. Vigil Mass.  The “I am Worship” team from Belfast will help to prepare the music for this Mass.  During the course of the Novena, a number of young people participating in the Diocesan John Paul II Awards will have an active role during the Novena liturgies.

All are welcome to participate in the Novena.

For further information on the Novena, please contact Kilmore Diocesan Pastoral Centre, on 049 4375004, or by email to seancoll001@gmail.com