Report on the Visit of the Relics of St. Oliver Plunkett – Tuesday 9 June 2015

Glorious Summer sunshine favoured the many people from across the diocese of Kilmore and neighbouring dioceses who travelled to the Kilmore Diocesan Pastoral Centre in Cavan during the visit of the relics of St. Oliver Plunkett on Tuesday 9 June last.

The relics arrived at 10:00a.m. and were carried in procession up the main avenue to the main entrance of the Centre by members of the Knights of St. Columbanus where Fr. Enda Murphy, Diocesan Director of Pastoral Services and Youth Ministry, led the liturgical welcome.  The procession then made its way to the Centre Chapel where they remained for a further 12 hours.

Knights of St. Columbanus from the diocese maintained a vigil with the relics for the duration of the visit and assisted with stewarding in the chapel.  They were assisted by brother Knights from Monaghan and Drogheda.

Fr. Enda Murphy celebrated a lunchtime Mass in the Chapel at 1:15p.m. for those doing examinations.  Fr. Tom McManus, PP Corlough and Drumreilly Lower, celebrated an early-evening Mass at 5:45p.m. during which a new musical setting of the Mass in honour of St. Columban, composed by local Cavan composer, Paul Flynn, was sung for the first time in public.  2015 marks the 1,400th anniversary of the death of St. Columban.  The choir, directed by Paul Flynn, comprised of members of the Cavan Cathedral Choir, Cavan Singers, and the St. Michael’s Church Choir in Enniskillen.  Rev. Damian Kivlehan, one of the diocese’s Permanent Deacons, assisted.

Cardinal Seán Brady, Archbishop-emeritus of Armagh and a native son of the diocese of Kilmore, was the principal celebrant and homilist at the 8:00p.m. Mass. He was assisted on the altar by Rev. Andy Brady, the second of the two Permanent Deacons.  The music for this Mass was provided by the Ballyconnell Folk Group.

Senior servers from Cavan Cathedral participated in all the liturgies during the day.  Knights and Centre Personnel read the readings while local participants in the Diocesan John Paul II Awards Programme read the Prayer of the Faithful.  Civil Defence personnel were on duty during the day while Centre Staff and volunteers looking after car parking and catering.

There were opportunities to avail of the Sacrament of Reconciliation during the course of the day.  A Novena of Masses is currently being offered in honour of St. Oliver Plunkett for the intentions of those who visited the relics or who sent petitions into the Centre.

It is estimated that around 1,000 people of all ages visited the Centre during the course of the day before the relics left just after 10:00p.m. following a short liturgy led by Fr. Murphy.

This was the second year in succession that the relics were in the Pastoral Centre.  The visit was co-ordinated by Seán Coll, Centre Director, with the assistance of the Knights of St. Columbanus in Drogheda and Cavan.  It is hoped that the visit of the relics will now become an annual event.

Our thanks to Adrian Donohoe and Fr. Donal Kilduff for providing these photographs 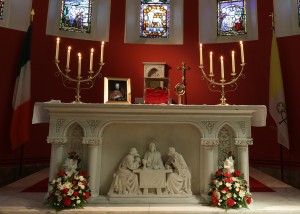 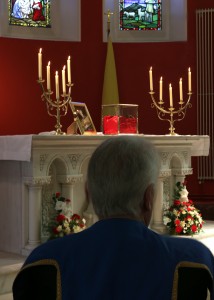 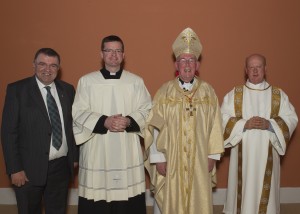 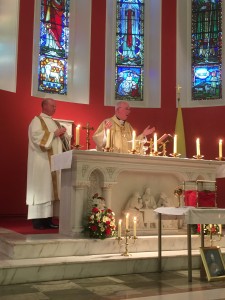 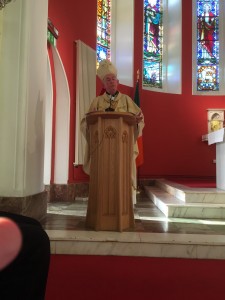 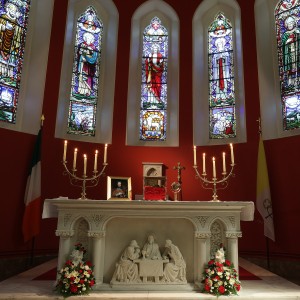 The relic of St Oliver Plunkett on display at the chapel in St. Patricks College today. Photo: Adrian Donohoe. 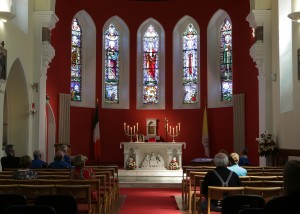